Meet the mushroom fanatics cultivating fungi before their customers’ eyes

As new forms of urban farming increase in volume and sophistication on rooftops, up walls, and in basements around the world, there’s one system that’s proving especially resilient—and yielding good-looking, great-tasting results along the way. Taking a democratic approach to the food supply chain, mushroom cultivators Smallhold are leveraging pioneering technology to put farming in the hands of anyone, everywhere—and shining new light on the mushroom kingdom’s many mysteries in the process.

It’s a Friday afternoon at Whole Foods in downtown Brooklyn, one of the busiest grocery stores in the country. Over in the specialty section, wedged between counters heaving with artisanal cheeses, handmade ravioli, and cured European meats, sits a futuristic steel cabinet with curved windows that emits an eerie, neon blue light. It resembles a set piece from the starship U.S.S. Enterprise, or a submarine porthole into an oceanic tableau. Inside the glass, plastic bags sprout intricate tendrils in bluish-gray, yellow, and salmon hues, alongside amorphous, pillowy white organisms. From a distance, they look like decorative coral, yet on closer inspection, they turn out to be mushrooms—golden, pink, and blue oyster, king oyster, chestnut, lion’s mane, and pioppino. And they’re not just sitting pretty, but growing (and being sold for consumption) right here, in the middle of the supermarket, with the aid of technology masterminded by urban mushroom cultivators, Smallhold. 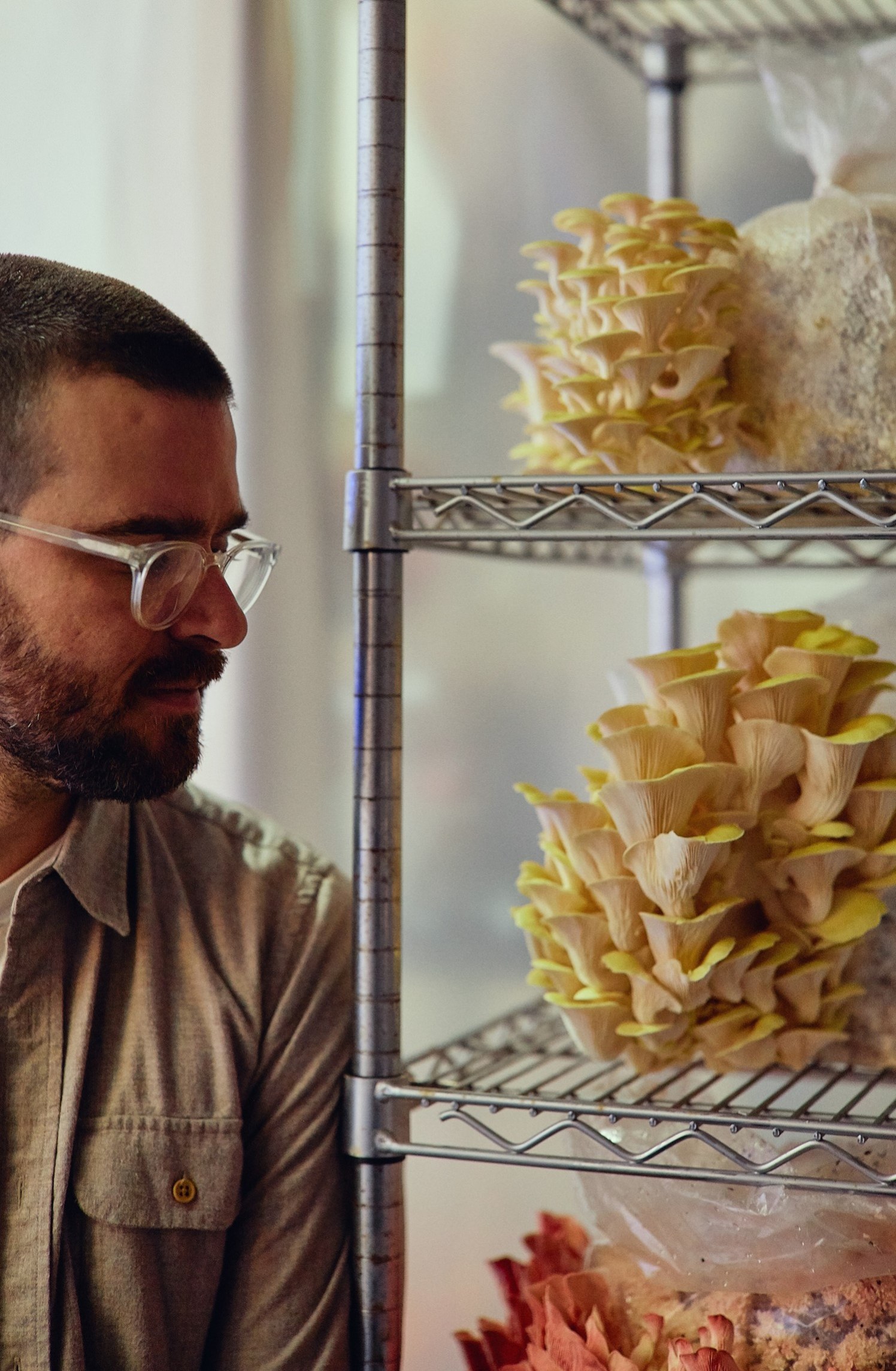 “I’ll be at Whole Foods doing a cooking demo, giving mushrooms to people in line who have their backs to the unit,” says Adam DeMartino, who founded Smallhold with his college roommate-turned-business-partner Andrew Carter, in 2017. “And they’ll ask, ‘Where are they from?’ Because that’s what the Whole Foods customer asks. And I’ll say, ‘We grow them right here.’ And they’re like, ‘Oh great, great.’ And I’m like, ‘No, they grow them right there!’” he continues, gesturing toward the glowing structure known as a “Minifarm”. “And it’s just like their heads explode, and it gradually sinks in for them that we are now living in the future.” DeMartino laughs as he says this, but he’s only half joking. What he and Carter have created is at the cutting edge of food production—the first and only certified organic farm in New York City, and the city’s only mushroom farm. It’s a shining example of how artificial intelligence married with human innovation is paving the way for the future of farming.

Part urban farm, part tech startup, Smallhold began as an experiment in a Brooklyn basement. Carter studied ecological design and environmental sciences, and has worked in hydroponics (a method of growing plants without soil by using mineral nutrient solutions in a water solvent), including a stint with Window Farms, producers of indoor hanging gardens. He started tinkering around with mushrooms on a whim. “It was real hackery,” he says with a laugh. “It was a lot of fun, but kind of just testing out the market, seeing if people in New York would respond to locally-grown mushrooms. Through that process, we realised that there was a need for it, but there was also a lack of technology and a lack of ability for people to grow commercial quantities of produce on site. So we started building the technology out.” With a background in startups and sales and marketing strategies (he even published his own fashion magazine, FutureClaw), DeMartino rounded out the skill set required for Smallhold to thrive. The pair had previously worked on other projects, including building drones and restoring and selling old motorbikes, and their catalytic dynamic is the stuff of entrepreneurial dreams. “He keeps a lot of things secret now, because I tend to try and turn them into businesses,” DeMartino says of Carter. “He’s a wellspring of ideas in terms of how systems should work.” 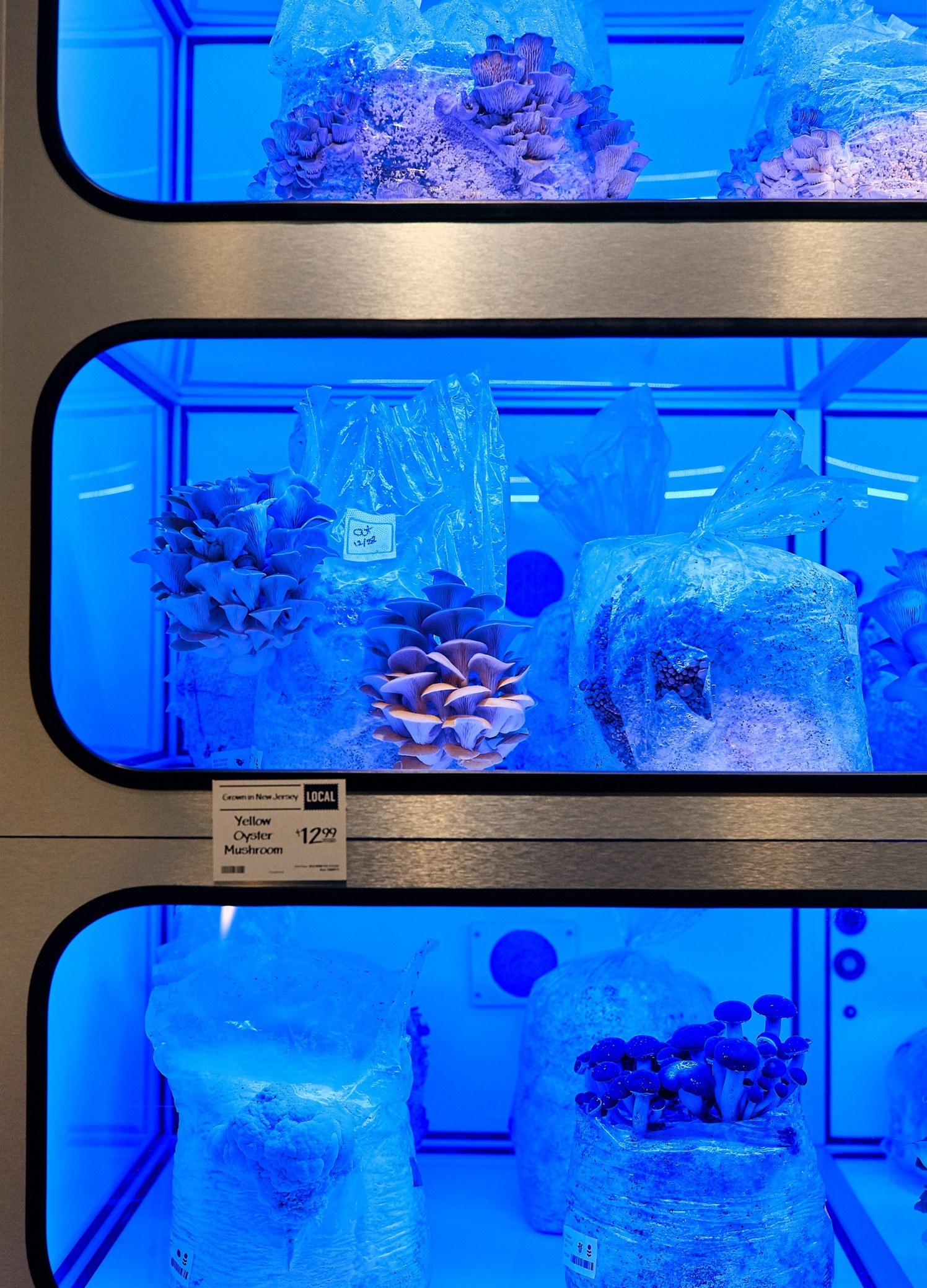 Smallhold went through a startup accelerator called Techstars, secured investors, hired a small staff, and quickly went from a basement to a shipping container to the Minifarms that they have installed at a growing number of grocers and restaurants, including Mission Chinese Food, Kimchee Market, and North Brooklyn Farms. Smallhold’s proprietary technology allows their physical operation to remain incredibly lean and nimble. The team pre-grow the mushrooms for three-to-four weeks until they begin to fruit, then it’s off to the in-situ Minifarms, where they mature and are eventually harvested, dramatically reducing the distance between farm and table. All of this is controlled via automated, responsive cellular networks that operate 24/7. “But the bigger thing is allowing us to constantly update the parameters if necessary. So if they want to grow a different variety, our systems can update it. The customer never has to look at their cell phone or computer, or control it in any way,” says Carter.

Of course, the idea of urban and indoor farming isn’t new. Hydroponic growers, vertical crops, and rooftop gardens are flourishing the world over, but each of these models still requires ample space and a cold-chain distribution network (a series of refrigerated production, storage and distribution activities, which maintain the desired low-temperature range for storing and transporting fresh produce). “There's a lot of new agriculture technology out there,” says Carter. “And what happens is that either you have these large-scale facilities outside of the city, or you have stuff that's happening in the city, but it's not producing enough to make a big difference. And so we needed to create technology and a model that allows us to grow in the city, but actually make an impact on people's buying habits.”

Each Minifarm yields anywhere from 14 to 54 kilograms of mushrooms per week. “One of our main goals is to make local food affordable,” says Carter. “There are many projects out there that can grow food locally but end up being kind of expensive and not really accessible, and there are a lot of waste statistics. We see this going large scale before it goes small scale. I think there’s potential in doing this anywhere.” In fact, when Smallhold started, the idea was to bring the Minifarms to traditional farmers to supplement their off-season periods. “There are so many different ways that we can sell this thing,” adds Carter. “But we found a customer base in restaurants and grocery stores, and we have to concentrate on those for now.” 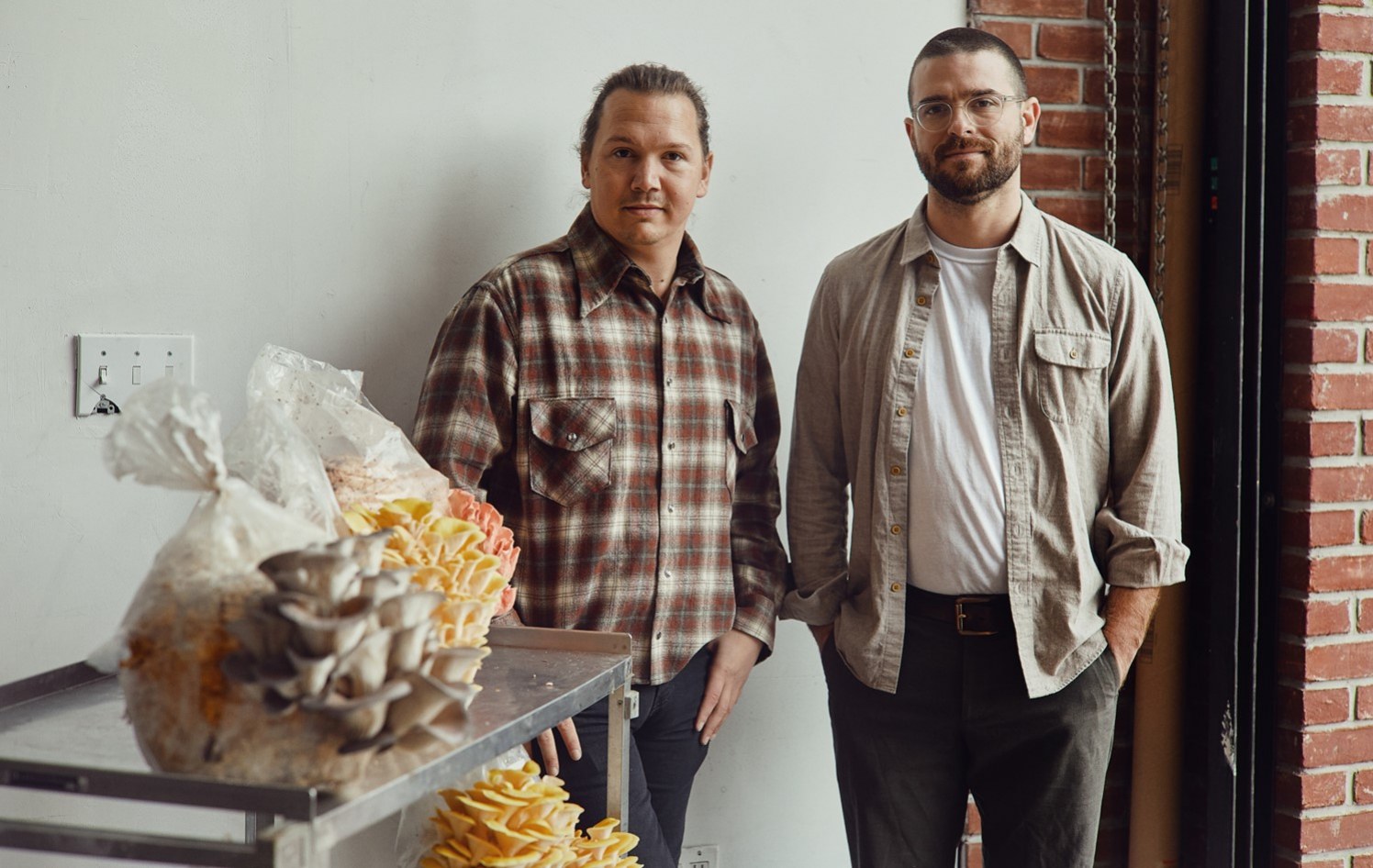 DeMartino believes they are at the very tip of an industry that’s in its nascent stage. “If you look at a picture of a skyscraper that’s overflowing with greenery, and it’s providing this abundance for the surrounding urban environment—that’s a picture of sustainability,” he says. “But if you take it a step further and use the readily available technologies, what you have is an environmentally friendly, nutrient dense type of produce that, in a very short amount of time, anybody can farm, anywhere.”

Chef Tara Norvell, who, pre-pandemic, was running adinner residency at Honey’s in Bushwick, has been a champion of the project since its basement days. “After cooking and eating Smallhold mushrooms for the past six years, I feel like I’m just starting to scratch the surface of their culinary potential,” she says. “It’s limitless! I love grilling the blue oysters; the pink and yellow oysters are stunning showstoppers and have distinct and delicious flavors. All of them are amazing to use in a broth. The lion’s mane is my favorite, it’s so much fun to work with and eat. I’ve made Bolognese, fried “nuggets,” tamales, chocolate cake…”

Though DeMartino himself quickly became a mushroom fanatic, reading up on mycology and becoming versed in the vast (and largely untapped) mushroom kingdom, it was Norvell who changed his perception of viewed mushrooms as food. “If you look at the food pyramid, you don’t see mushrooms on it. You just have everything that’s mandated by the FDA, the USDA, from, like, the 1970s,” he says. “And Tara said, mushrooms basically go around the pyramid. And they also do that on a menu—they can be the center of the plate or go well in an Alfredo.” 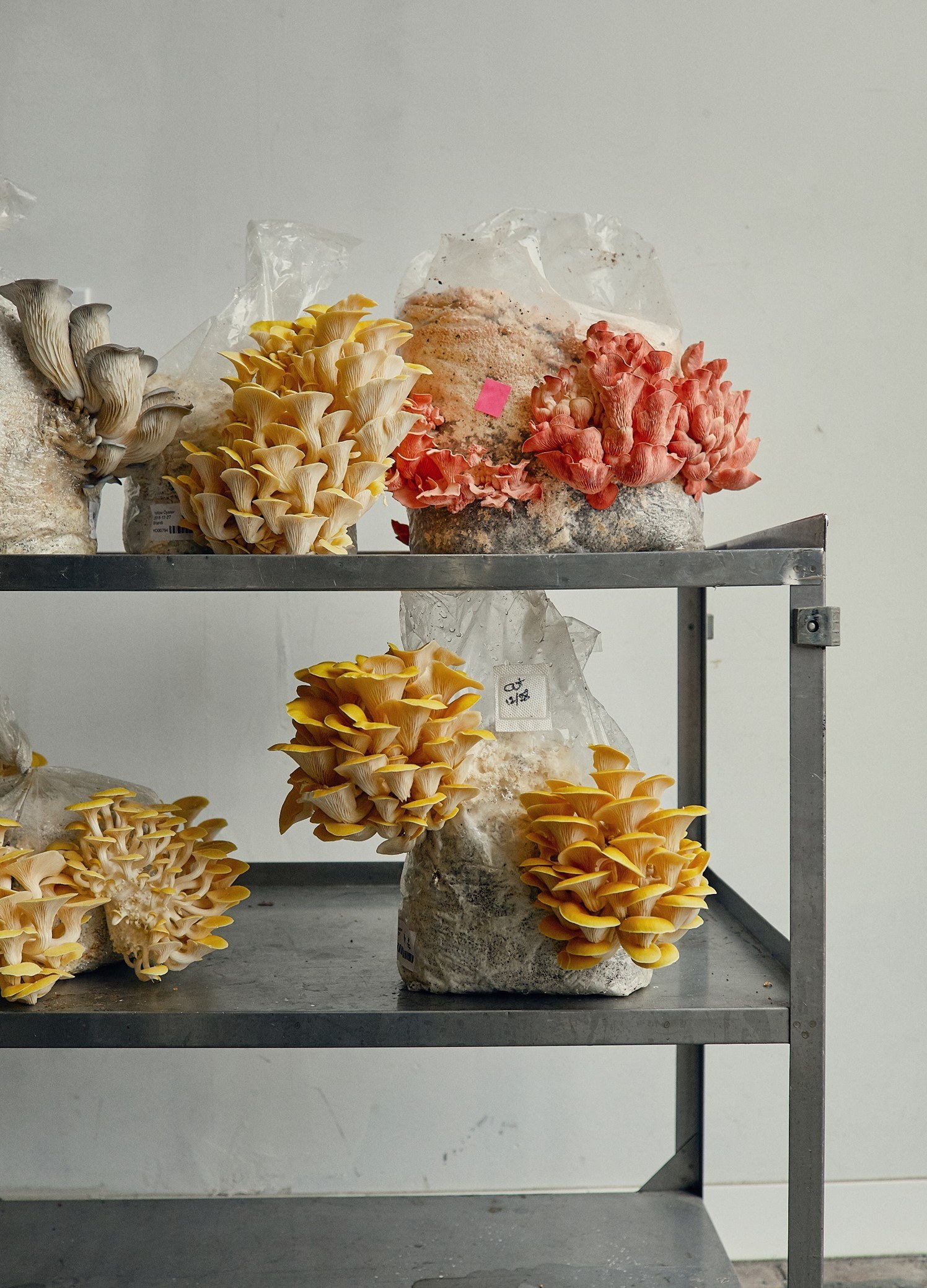 Working with chefs has been the highlight of DeMartino’s job. “Mainly because the feedback we get about our produce is the most valuable thing—it has guided our intuition,” he says. But to realize Smallhold’s true potential, they want to feed the entire country. “There are so many reasons why mushrooms are the produce they are today, and I think people are only just beginning to realise what sort of power they have. The chefs are awesome, but they’re in a part of Brooklyn, not somewhere in the middle of the country. If we can’t reach the cook at home, then I don’t think we’ll have done our job.”

Norvell agrees: “Real food for everyone,” she says. “It seems simple, but capitalism has leached into every part of our food system and I believe in a future where everyone can have access to real food. Smallhold is disrupting the industry by creating a completely new design. More importantly, they aren’t just giving people direct access to real food, but the nutritional value of adding fungi to your daily diet is a type of health insurance on its own.” 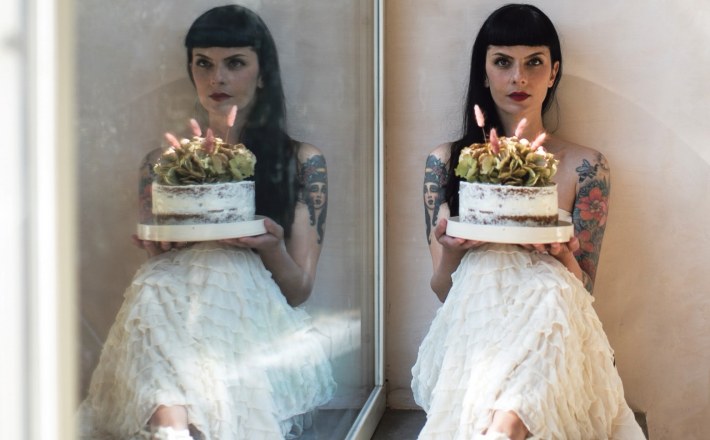 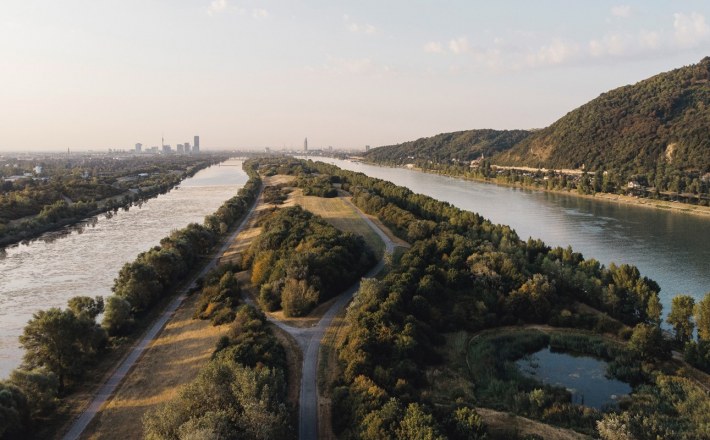