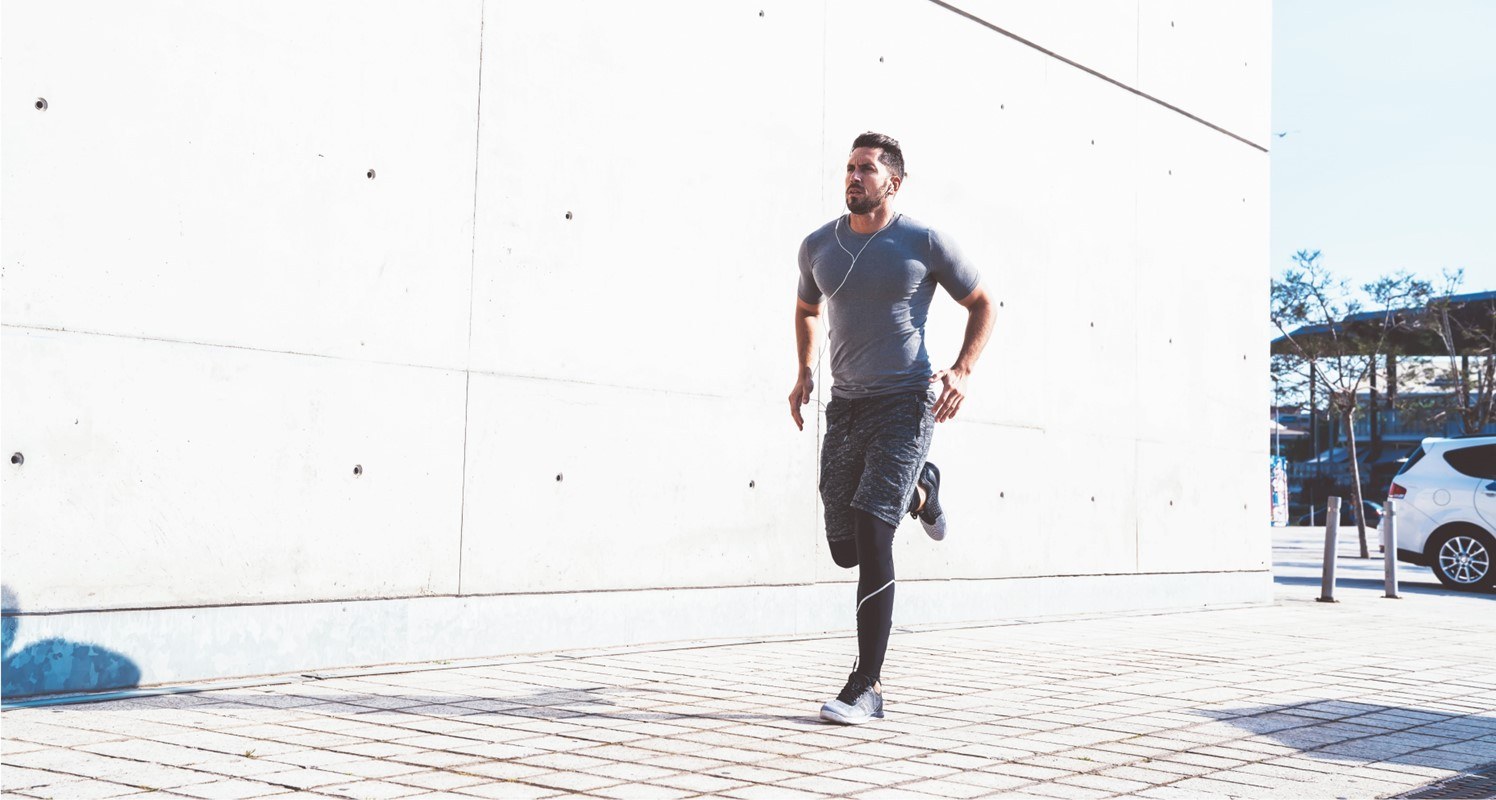 As I compose this piece, I’m currently on a writing assignment in the Baa Atoll of the Maldives with my family, training for an ultramarathon, which I’m due to run five days after returning to my urban landscape. The circumference of the island is minuscule, just north of a mile. To get the necessary distance I’m looping the islet dozens of times, creating a palimpsest of footprints in its loamy, ivory-coloured sand.

Initially, I was counting my blessings. It felt like utter luxury dodging crabs and coral over the cars and cyclists that pose an existential threat to the city runner. But after enough circuits I find myself perversely missing the tactile experience of urban running: the heady sensation of dancing through streets as one’s body spews endorphins; the myriad sights, sounds and smells that comprise a cityscape.

The benefits of running are manifold. Running burns more calories than almost any other exercise, strengthens muscles, builds stronger bones and upgrades the cardiovascular system. Recent studies have shown that sustained long-distance and ultra-running can even benefit your DNA, lengthening the telomere protein caps at the end of chromosomes. In other words, it may be able to reverse ageing on a cellular level.

But what of running in urban settings? Running in general improves brain function, but when navigating the onslaught of sensual data that comprises a cityscape, the mind flourishes. In a recent study, running and meditation have been seen to have a similar effect on the brain. Breathwork, the present moment, awareness of your bodily state and mindfulness all dampens down the white noise around you. This experience is even more enthralling when side-stepping and shooting the gaps of a busy urban street, more so at rush hour.

Running can be many things. It can be gruelling and exhilarating, grim and epiphanic. To me, this elevates the experience of navigating a city to new levels. The senses are heightened. Details occasionally emerge from the streets in ultra-high definition. For the traveller, this can make a journey all the more memorable.

One of the more obvious aspects of running as a means of discovering a city is that you can cover significantly more ground pounding the pavements. Whereas one generally walks at a rate of circa one kilometre every 14 minutes, if you’re running a tempo pace you might be able to take down 10 to 12 kilometres an hour. Granted, it may be difficult to pay close attention to your surroundings, but you’ll experience a lot more of them. 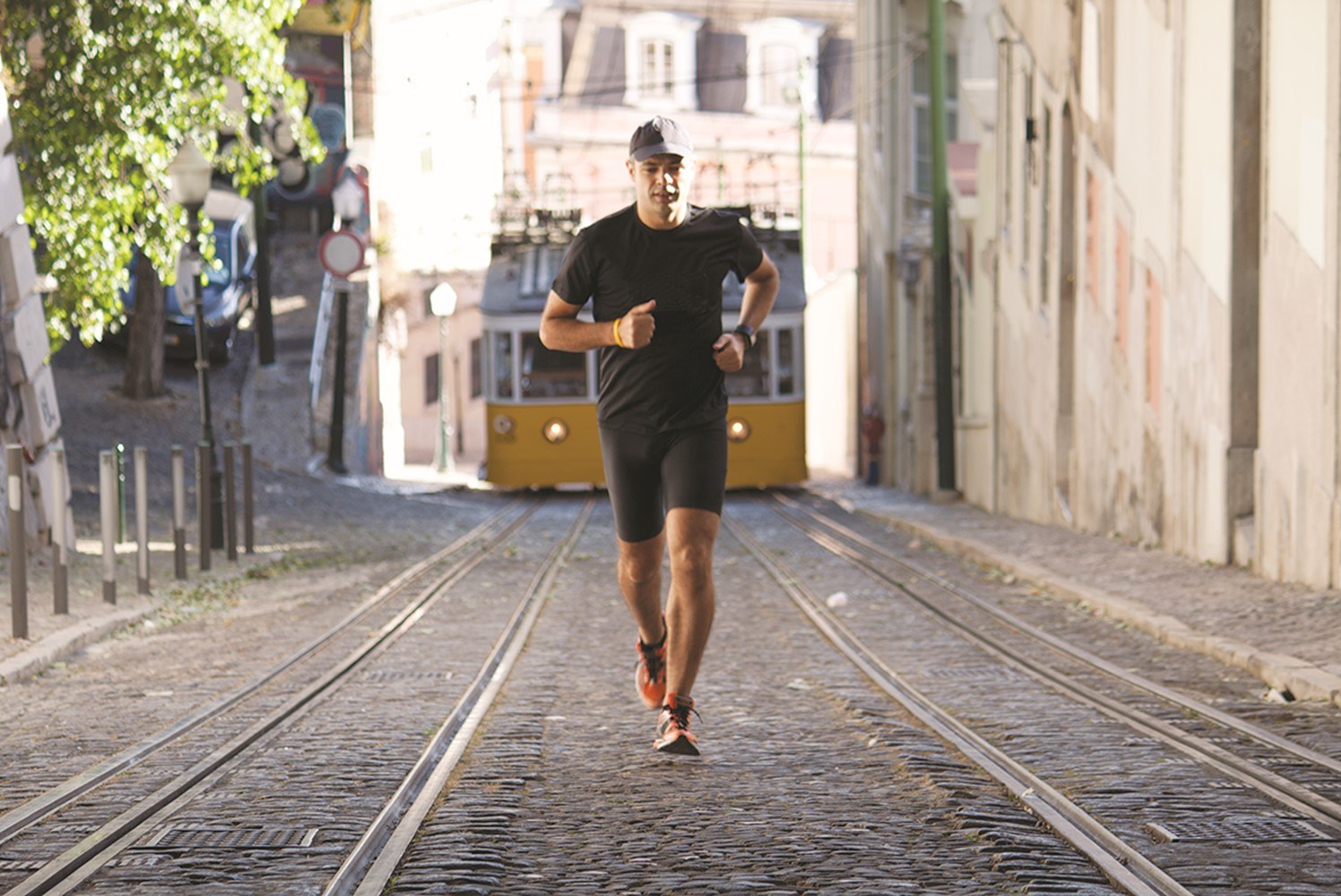 Running will almost certainly take you to the unguarded, unselfconscious corners of the city, where life plays out oblivious to the distortion of tourism, at its own speed, authentic. Countless times I’ve found myself in the industrial bowels of a metropolis, not necessarily the most aesthetically pleasing experience but perhaps more honest than the more confectionery retail centres and boulevards that visitors frequent. It offers a fuller picture of place.

On the other hand, there’s something to be said about the thrill of sprinting down a famous promenade or planning a route around sightseeing or an architectural tour. There’s naturally a joie de vivre involved in moving your body. This is only heightened by doing so through a setting you might come across on the silver screen. Coupling this with music can amplify the sensation–what I call the Baby Driver effect. When your strides and movement coalesce with the rhythm of song, it often feels like dance.

Planning is essential to running through an unfamiliar city. You might be wondering how best to plan a route through a strange place. Initially, when I first started running abroad, I would search online for potential routes but soon found that apps are much more useful. AllTrails is a great one if you’re looking to find a classic city routes, particularly through parks.

Running will almost certainly take you to the unguarded, nselfconscious
corners of the city, where life plays out oblivious to the distortion of tourism, at its own speed, authentic.

However, when I’m travelling my first point of reference in figuring out where to run is inevitably Strava. In the maps section of the app, you can choose from proposed routes from your location (with options for desired length and difficulty), heatmaps where you can see the most popular streets and parks, Parkrun circuits and even proposed trail runs. If you’re a bit obsessive, you can look up record-setting or professional athletes and then follow their runs. If they’re strong, committed runners, you can be sure of it being an interesting route.

As for when to run, that’s highly subjective. Those with full-time jobs or families often tout the dawn run, which has the fringe benefit of eliciting virtuous feelings. If you’re in a busy city, like Venice, rising early is a must for dodging crowds, and running with the sunrise always imparts a certain cinematic facet to the experience. I prefer to run with an empty stomach, so usually opt for mornings; however, there’s something to be said about a sunset too. Running through the city streets as night falls has a certain timeless feeling to it, particularly when navigating quiet, ancient neighbourhoods.

For my sins, for the time being, I’ll have to make do with the Indian Ocean, white sand beaches and a tiny island. Yet when I think upon returning to the city and running its streets, I don’t feel sad. In fact, it’s quite the opposite.

Regardless of where you’re running, or what time of the year it is for that matter, Salomon’s Sense Aero LS Tee will keep you cool and protected, and so lightweight that it often feels as if you’re wearing nothing at all.

There’s no better shoe for an urban run than French brand HOKA’s Mach V, which has established a reputation for itself as being equally adept as an everyday trainer or a racer for distances from 5k to a half marathon. Super lightweight with a mega comfy upper and bombproof lockdown, the Mach V is a staple, go-to city runner.

Battle-tested in the rugged terrain of Northumberland, in the north of England, Montane excels in outdoor clothing. The brand’s Dragon Twin Skin shorts have been built with long runs in mind and are suitably comfortable, with a close-fitting undershort beneath a lightweight, loose overshort.

Finnish watchmaker Suunto’s 9 Peak Titanium has chic lines and classy, lightweight linked bracelet, and sit just as easily in a boardroom as a finish line. But don’t let its ultra-thin and slim design fool you, it’s tough as nails with sapphire glass and Grade 5 Titanium.

Socks might be the most unsung hero of one’s running kit. Healthy, happy feet are central to enjoying yourself, especially at distance. Stance’s Run Light Staple Crew will ensure this, with ultralight cushioning and a lightweight, breathable barrier between your foot and your shoe.

The Patagonia Houdini jacket only weighs 100 grams and is so stowable that it easily packs down into a running belt or pocket once you warm up. As with all things Patagonia, its sustainable credentials are top shelf with a lifetime warranty.

Pick up the sightseeing pace. Why walk when you can run? 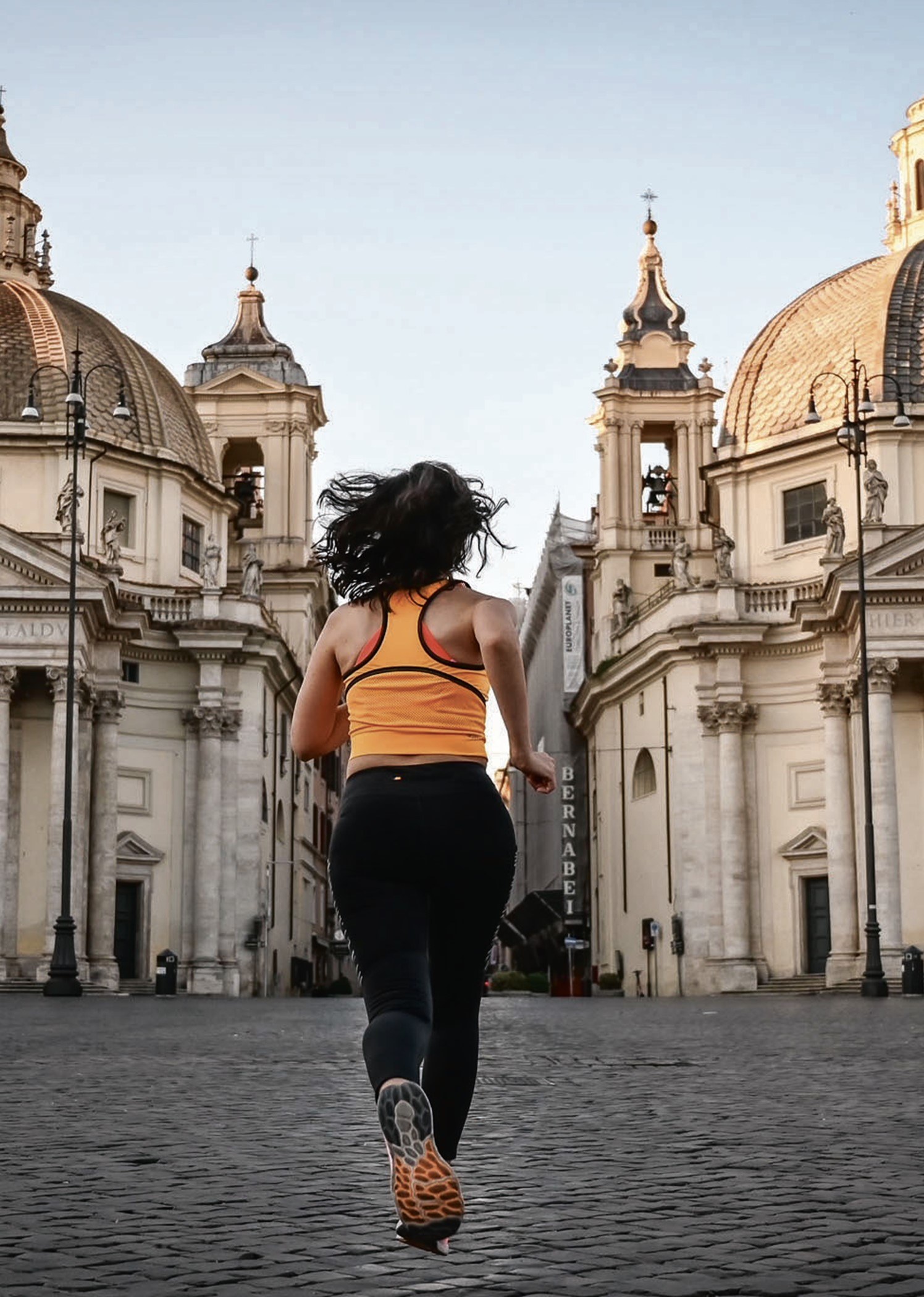 The Eternal City offers up an embarrassment of riches to sightseers with a penchant for history. ArcheoRunning is the first certified running tour in Rome and probably one of its finest, with guides as astute in the succession

of Caesars as they are in cadence and steps per minute.

Copenhagen is the perfect sized city for running. It’s easily discoverable – you can even experience the majority of it in one run if you have the stamina. Go Running Tours offers sightseeing opportunities that take in The Parliament, Nyhavn, The Royal Castle and The Little Mermaid.

Lisbon is the city du jour for the hip and trendy, and its hilly terrain and hidden byways make it a challenging, enchanting one to investigate on foot. Lisbon City Runners will take all of the navigation off your hands, showing you all of Lisbon’s best angles.

Stockholm has it all for the urban runner: neoclassical architecture; gorgeous waterways; sylvan parks that wend their way around Nordic rivers and lakes. Run With Me Stockholm will enable running along all of these and can even wrap in a yoga class to help you offset the impact.

The City of Lights might just be the best in the world to explore in running shoes. Run Run Paris sets you up with a top-class runner, provides water, healthy snacks and waterproof jackets, and will even take photos as you navigate the city, so you can keep your Instagram feed sparkling. 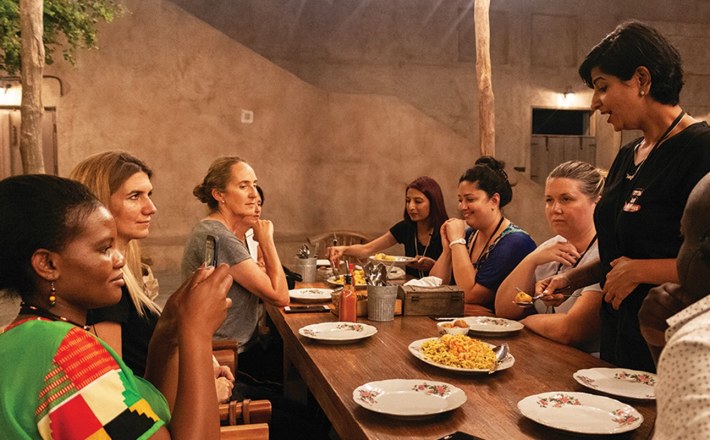 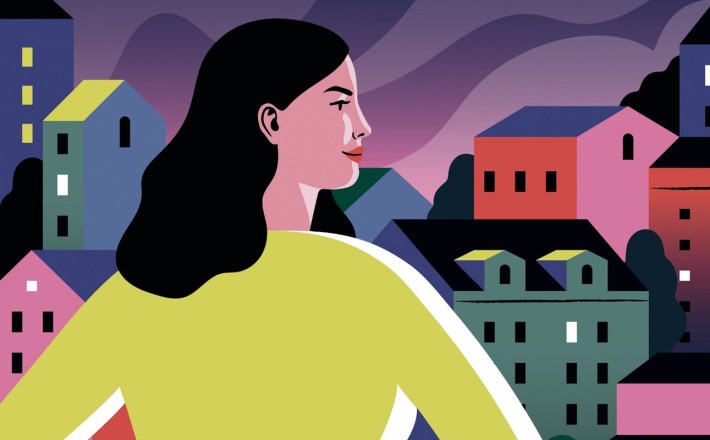